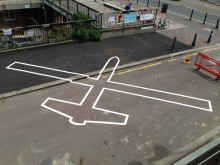 Contemporary art, relying on new media and technologies (digital art, media art, post-internet art) is found at the intersection of art-as-we-know-it, new media and technologies, internet economy, (post)politics and bio- and techno-science. It interacts intensively with these fields, which includes reciprocity, adaptation of methodological devices and approaches, exchanging areas of operation, hybridization and amalgamation. It is important in this respect that art is by no means a passive and second-rate link in these interactions, which means it is simply not scientificized, economized and politicized, but that there is a growing trend of artistic innovations entering into other fields, which become artified; they are becoming kindred to art.

In the lecture we will be discussing those particularities of contemporary reality, which are affected by art; it is why they are changing and becoming artistic in a certain way. Rather than the aestheticization of politics and everyday life, we will focus on the artification of the crucial areas of today’s reality. Contemporary art is the generator behind numerous changes, which should be catching the attention of modern sciences, economy, the media and political theory. Art is more of a first ascensionist in the sphere of today’s vast social and conceptual changes, paradigm shifts and innovations, than their (late-coming) derivative.

Associate professor Janez Strehovec, PhD, is director of the Institute of New Media Art and Electronic Literature and a researcher. He is a part-time lecturer in New Media Art Theory at the Academy of Fine Arts and Design in Ljubljana. Recent essays include: The e-literary text as an instrument and a ride: novel forms of digital literature and the expanded concept of reading. In: Cornis-Pope, Marcel (Ed.). New literary hybrids in the age of multimedia expression: crossing borders, crossing genres. Amsterdam; Philadelphia: John Benjamins, 2014, 340–356. E-Literary Text and New Media Paratexts. In: Examining Paratextual Theory and its Applications in Digital Culture. Hershey, PA: IGI Global, 2014. 46–62. E-Literature, New Media Art, and E-Literary Criticism.CLCWeb: Comparative Literature and Culture 16.5 (2014): http://dx.doi.org/10.7771/1481-4374.2486. His latest book Text as a Ride will be released next year.