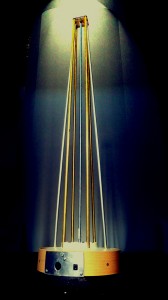 The Wardenclyffe Tower Sonata is a paraphrase of a local project by Nikola Tesla, who set up one of the first wireless transmission stations (the Wardenclyffe Tower) at the turn of the 20th century in the USA. I am using his idea of a single radio transmitter that could reach the entire world – an idea, which at that time was undoubtedly humanistic, but is really fascist from a historical perspective (for on the other hand there was a mass of Volksempfänger (“people’s receivers”)) – in the sense of a modern-day “people’s receiver”, i.e. make your own music. The work is therefore an inversion of the original principle to a contemporary humanistic approach. The Wardenclyffe Tower is a musical instrument that performs the title composition.

Borut Savski, born in 1960 in Ljubljana, is an intermedia artist with a particular interest in the domain of sound, supported by the use of technical solutions for unconventional instruments and autonomous sonic and visual structures/sculptures. First sonic experiments at the Radio Student Ljubljana studio in 1994. First cybernetic sound installation Sound Biotope (1999) in Kapelica Gallery Ljubljana, together with American artist John Grzinich. Author of essay Sound as Metaphor, which discusses the basic principles and forms a parallel to society. Later performed various solo concerts, developed instruments, and collaborated with musicians and other artists, gradually introducing electronics and autonomous movable mechanisms. Between 2006 and 2010 composed music for three dance performances by MatejaBučar. In 2006 organized the Intermediate Spaces festival (in co-production with Trivia Art) and in 2007 started the Trivia Records label. Co-founded (2007) the intermedia initiative Circulation 2 and collaborated with Milena Kosec, Bogdana Herman and Stefan Doepner for the Etnobandaproject. After 2010 worked alongside Bogdana Herman on the project Newly Composed Slovene Folk Songs, and at the same time produced a series of interactive autonomous structures/sculptures titled Strained Structures. Performed with guest appearances at several international venues and most relevant locations in Slovenia. Currently works with tactile interfaces and interactively generated sound/music.