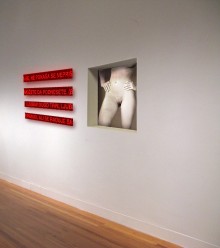 The conceptual layer of the work includes several levels. Relations between these levels include oppositions of the conscious vs. the unconscious, male vs. the female principles, and sign vs. meaning. First, the viewer is offered a direct representation of the driving force of modern man and his energy. Was man always eager about the female body? What is it that creators of consumer society work on relentlessly? What is the most successful sales technique, if not the allusion to sexuality? What is it that women are subjected to when “subtly” exposed to men’s glances? This work offers all of that directly; the naked body is within reach, and what intrigues is in plain view. The perception of such a work is even more interesting because of the banality and directness of the displayed. The scene that we observe in the most direct way is never experienced as art. Sexuality is not perceived as a superficial impulse or scene unless it is in service of something, wrapped into an art form with a supposed higher motive. Why? It is because of the way we perceive and experience the world. This work wants to talk exactly about that. Will the encounter with a living naked woman’s body cause a superficial sense of meaningless sexuality, or will it be, because of the context in which it is located (framed with bands of running LED panels and presented as art work), perceived in a different way? Such scenes are willingly observed directly, in paintings for example, and only then enjoyed as the “beauty” of nudity, but direct encounter provokes a sense of banality. While doing so, we never ask ourselves what such a scene is trying to tell and in what way it is telling a story about ourselves. So, the scene itself is no longer a problem, the experience of the scene is. My intention, therefore, was to offer a clean, almost banal scene, as exhibited art. The perception of this artwork should differentiate between men and women, and that is one of the motives behind it. Will women find another confirmation of their inferiority, and will men find another confirmation of their superiority?

In this work, the focus and attention of the observer should be on a particular aspect of the female body, with a clear analogy to painting through the ages (Amadeo Modigliani, Gustav Courbet, etc.), where the nude mainly occurs as a desirable and common motif. This adds an interesting “subtle-macho” thread; the manner of use of the female body, the “image” and scene in general, and so on, through the centuries. Does the image that leaves a hole in the human mind deserve its place in art?

This work also provokes, with the widely used, often in a quasi-feminist manner, story of gender inequality, which is confirmed by the work of artists through centuries, and it is clearly visible even today, through the explicit use of female body and sexuality in general. Regardless of how many scenes, movies and photos are out there, they are always intriguing and never enough. The work could possibly cause some feminist reactions, although it should be viewed as being in favor of exposing inequality and as a certain form of criticism, showing the viewer a direct, raw image of something that he is constantly exposed to.

Dino Karailo, born in Belgrade in 1977, graduated from the Faculty of Fine Arts in Cetinje in 1999, painting department. In the same year he continued post-graduate studies and later worked as a teaching assistant at the same faculty (2000–2004). He completed his MA thesis in 2004. After obtaining his MA degree he became actively interested in the field of multimedia, digital art and new artistic practices. He also deals with design, motion graphics and animation. He is currently a PhD candidate at the Academy of Fine Arts in Belgrade. He is a lecturer at the Faculty of Visual Arts in Podgorica. He earned the academic title of assistant professor in the field of digital arts in 2012. He is a member of the Association of Fine Artists of Montenegro since 2000.