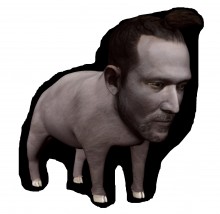 — interactive sculpting and puppets exhibition with physical and virtual animation, 2015

The art project CorporisAnimati is part of a bigger story Corpus Indeterminata, which explores the use of contemporary and traditional art media in connection to new technologies. In a contemporary sculpting fashion, the author uses casts from living human and animal bodies to highlight the presence or absence of the mass body rather than the expressive modeled form. He brings in the three-dimensional matrix of a pig’s body, connected to a human head via an AR code, to the physical space of the viewer, and juxtaposes it to the physical puppet. In the virtual space, we will thus come across a number of virtual piglet doubles with human heads, which were created using 3D scanning.

The exhibition is concerned with the relation between worth and value: the human body is a value, and the animal one has a certain worth. To a human, a pig can be an animal, or food, or material for a statue; human fat was considered aesthetic in the arts, unwanted in cosmetic industry, and symbolic in showing off plenitude. New expressive means enable new relations between real, virtual bodies and robots, and at the same time, by joining the human and the animal into a hybrid body, establish a new non-anthropocentric system of values.

Zoran Srdić Janežič (b. 1974) is a sculptor and visual artist, employed as a creator of puppets at the Ljubljana Puppet Theatre. His work includes performing, sculpturing, drawing, printmaking and book design. Primarily interested in humor, which he uses to point out neuralgic points in our everyday life and global trends, he often applies theoretical concepts of contemporary philosophers in the field of visual art. He uses traditional sculpturing materials in a non-traditional way (or the other way around) and employs various means for different purposes: video, animation, 3D print, AR code, nanotechnology and other forms of new media. His work has been exhibited in over 20 solo and numerous group exhibitions in Slovenia, and his stone sculptures can be seen in four public places. With fellow artists he co-founded the Gulag Institute for Contemporary Art and Cultures.