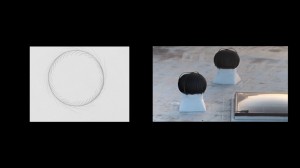 Project AR libris is a responsive installation in public space, which continues the research and enables the creation of new intermedia contents by using AR (augmented reality) technology. The AR libris provides new meaning to the cyber-space in the city; a tiny digital library where literary contents intertwine with intermedia creativity and user engagement. The project is a game that guides the user through temporal, spatial and programming dimensions of a story composed of words and literary texts combined in a 3D animation, video and responsive objects.

The content is a mesh of word- and text-searches, connected through real spaces in the city, marked with AR codes, into internet contents and virtual bases consisting of various media and formats. The locations appear in frequented public spaces, and are visibly marked with an AR code functioning as a link to individual contents. The project combines a live interactive VR installation and the visitors’ participation. It includes 3D objects and animation, video, a series of interactive objects, and visual and sonic imagery in connection to the literary text. Augmented reality (AR) stands for advanced computer technology, which joins the physical world with the interactive virtual one. AR has many advantages, one of them being that while still remaining in the real environment, we can admire the visual virtual world at the same time. The project thus enables the creation of entirely new and different public areas, which are interspersed with art and the kind of technology that allows for such representations.

AR Libris is a project that brings together poetry, video and advanced computer technology. On a guided tour through the city, we will stop at Poetry stations located in the city streets, and, using our mobile devices and AR technology, enter from the physical world into the interactive virtual world.

The project was created with the financial support of the Municipality of Maribor, the Slovenian Book Agency and the Office of the Republic of Slovenia for Youth.