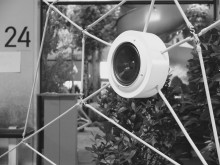 Between being an object but also instrument the „Netz“ explores a haptic approach to physical creation of sound, converting the bending of elastic tubes into digital real-time generated and modulated sinus waves. The mechanical construction is inspired by the architecture of spider nets, their stability and also, on a metaphorical level, the spider as a symbol of the unconscious and hidden parts of human perception and the human trans-rational condition.

Jens Vetter was born in 1980 in Germany. Since 2014 he is a student at the department of Interface Culture, Kunstuniversität Linz, Austria.