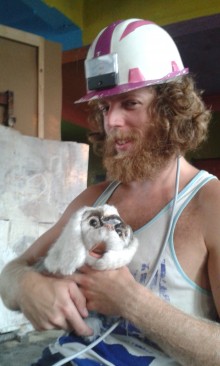 The brain stimulation helmet applies sequenced pulses of electric current to tissue between its electrodes. The purpose is to stir up the nervous system. According to the somewhat obscure information available in the public internet, this treatment might cure depression, augment learning abilities and help concentration. Unfortunately, regarding this particular device, thus far no clinical trials have been performed to assert or reject such claims. However, tactile and visual systems do react to it, the effect being not disagreeable.

A large body of anecdotal evidence supports the claim that, if combined with other therapeutic practices such as petting toy animals, gentle massage, or moderate socially motivated consumption of alcoholic beverages, the brain stimulator helmet puts happy thoughts in your mind and a smile on your face. This device was initially built for [Koelse][1] therapy tent in 2015 edition of H2Ö festival, Turku, Finland. (Association of Experimental Electronics Koelse)

Otto Urpelainen (FI) is a solution developer for energy systems and is currently cooperating with a cultural exchange project in Ljubljana about the art and engineering of wine-making and distillation. He has been involved with numerous exhibitions and performances, such as installations of Timekeepers and Shamanistic sessions throughout Europe, including Slovenia.