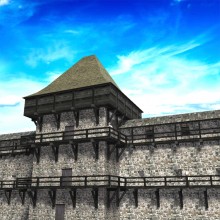 The project is a 3D construction of the 15th century city walls. Out of the five towers, only one was preserved (from the northern part of the wall) and used as a study case. The Čeligi Tower, originally named Black Tower or Smodniški (eng. gunpowder) Tower, was a vital part of the city’s defense system at the time. The 3D model is a copy of the existing tower with some added elements, mainly made of timber, which have not been preserved but were a distinctive feature of the defense mechanisms of that time.

Jan Sterniša (SI), born in 1986 in Maribor, graduated from the technical college Academia as an engineer of media production. He is engaged in 3D and spatial design and animation. He participated in the exhibition Robot Shop in the Cultural Incubator as a 3D animator, and led a workshop Modding Half-Life 2, where the participants were taught to modify computer games. As a 3D designer he was involved in the project implementation of Jože Slaček’s cybernetic theater, the project Concerto for 3D printers (2013) and in the production of the project Corpus Indeterminata 3D by sculptor Zoran Srdić Janežič (2013).

Gregor Rojko (SI), born in 1980, is actively engaged in the field of culture and graphic design for several years. He deals with graphic design (all types of printed materials) and print preparation (magazines, books, posters, leaflets, ads, corporate visual images and identities). He performs workshops and presentations of 3D printing in collaboration with the Youth Cultural Centre Maribor, the Cultural Incubator and Jože Slaček. For the International Festival of Computer Arts MFRU 2014 he produced a web platform in collaboration with Kristijan Robič. In the field of computer arts he works in editing, photo processing, and producing and manipulating digital images.

Jože Slaček (SI), born 1965, lives and works in Maribor as a program coordinator, animator and mentor. He is an author in the field of video, animation and multimedia. His first video art project was created in 1989, when he carried out a series of screenings by Slovenian and foreign video artists at the Media Nox Gallery. In the early nineties Slaček began to focus on computer art and is known as one of the initiators of the International Festivals of Computer Arts – IFCA (MFRU) in Maribor, which debuted in 1995. He participated in the production of the mfru hyperfilm and supervised the building of the archive for the Computer Arts Festival. He participates in the implementation of VR projects as an author and organizer.